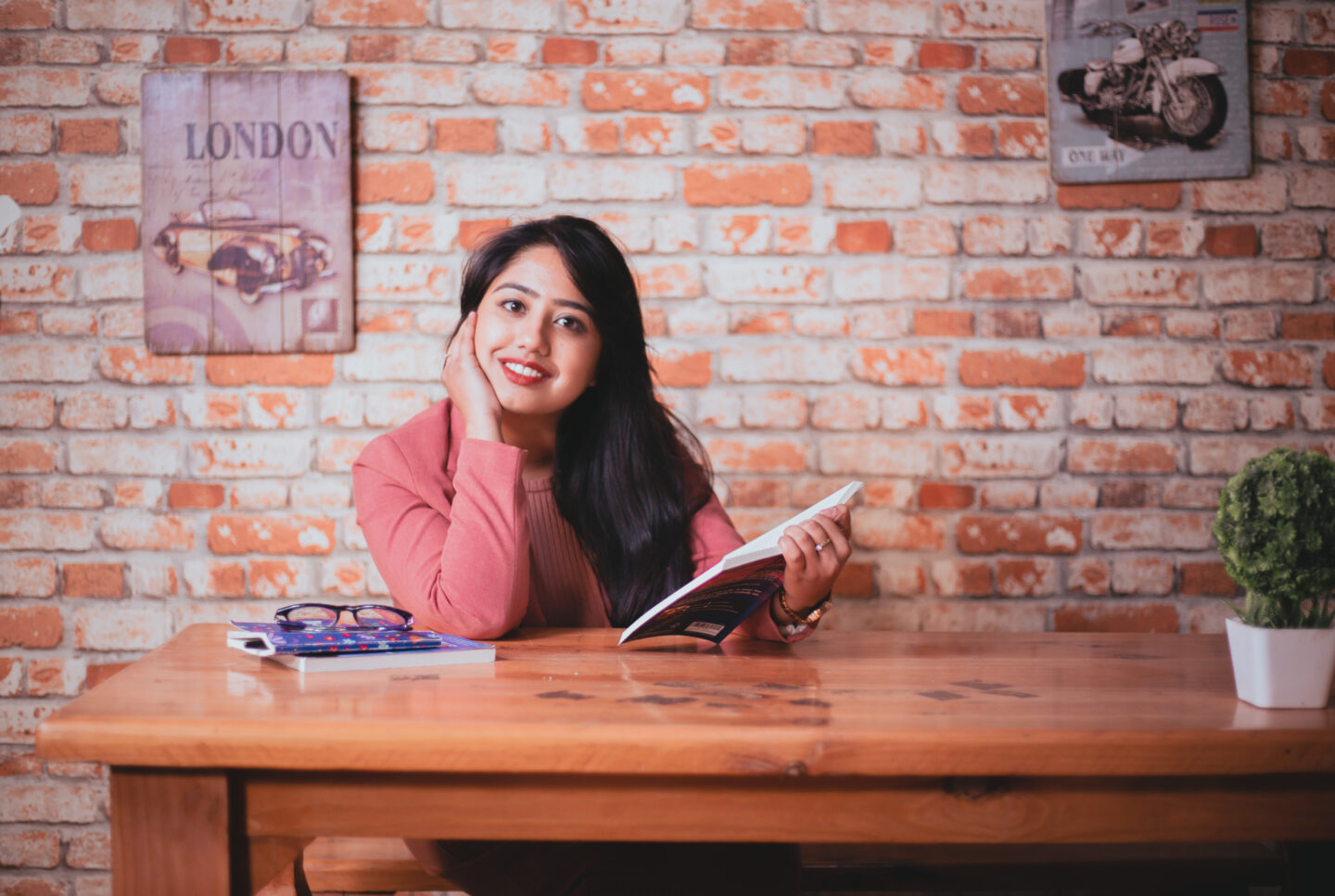 Stuti Changle is a national bestselling author. Her books You Only Live Once and On the Open Road have inspired readers across the country to make a move. Where the Sun Never Sets is her third book.

Stuti has a master’s degree in management from IMI New Delhi. Stuti quit her job to inspire people by sharing life-changing stories. She made her TV debut in 2019 as a host of the TV series Kar Ke Dikhaenge.

Stuti has sailed to the Andamans, camped with Indian jawans in Arunachal Pradesh, scuba-dived in the Indian Ocean, swum with the dolphins in the Mediterranean, floated free for hours in the Atlantic, and wishes to travel the world before she dies. Every year, she spends time in the coastal village of Palolem in Goa. She currently divides her time between India and the US, where she lives with her husband, Kushal Nahata, co-founder and CEO of FarEye.

Stuti Changle was born on 11th Sep 1992 at Christian Missionary Hospital in Tilda near Raipur. She grew up in a middle-class Hindu family. Her father was a banker employed with the State Bank of India and her mother worked in a government job as a school teacher. She was raised in various cities across India due to her father’s job that demanded relocation every few years. Moving to a new city every few years contributed to her extroverted personality and love for travel. Stuti also has a younger brother, Swapnil.

Stuti’s love for books dates back to her school years where she would often spend time reading fiction and geography in the library. While her friends spent time with their boyfriends, Stuti moved to the library. She was a nerd while growing up and bullied for her dark complexion, hairy skin, big teeth, braces and wearing heavy spectacles. She mostly confided in books. Nancy Drew, Famous Five, Sidney Sheldon, Stephanie Meyer, Peter Pan were some of her favourite reads as a teenager. It was only after she read ‘The White Tiger’ by Aravind Adiga, ‘Fight Club’ by Chuck Palahnuik and ‘Into the Wild’ by Jon Krakauer that she felt thoroughly motivated to write a book someday.

Stuti was a bright student with a 90+ academic record throughout. She was recognised in the top 10 students upon leaving higher secondary school in 2010. She wanted to pursue English Literature but did not find support from her family. Stuti graduated with a BE degree in Computer Science and Engineering from SVITS, Indore in 2014. She was offered with TCS Hyderabad on campus but chose to go for further education. Stuti scored 94 percentile in CAT and then went on to do an MBA in Marketing from the prestigious International Management Institute, New Delhi and post-graduated in 2016.

Stuti briefly worked with corporates like HSBC and Coffee Day Beverages in Pune and Mumbai respectively before taking the plunge in 2016 after watching the film ‘Fight Club’ for the 8th time. Her husband Kushal was her then-boyfriend working on his startup. He encouraged her to quit the rat race and work passionately for her long lost dream of becoming a published author. She still feels she is blessed to have a mentor like him.

Stuti wanted to be a writer from an early age. She wrote her first poem at the age of eleven – a poem about rain and her emotions for monsoon. She did it knowing in her heart that it was a Math exam and not an English exam the next day. Her father was particularly risk-averse and believed that writers died poor and wanted her to opt for a safer future instead. Her mother and brother were ruled by their hearts and they felt she should give this career at least one shot. They insisted and encouraged her to take part in Amazon Kindle’s Pen to Publish Competition. During a major financial crisis in 2017, her father helped her get through and has been supportive.

In 2016, after quitting her corporate career and devoid of its perks, she worked as a freelancer in the domain of marketing by the day helping her clients craft a compelling narrative for their websites, blogs and social media to make ends meet. Stuti conceived the idea of her first book On The Open Road in 2016 while sitting in Starbucks Cybercity Gurgaon. She would work from there on her book for long hours with a free Wi-Fi facility in exchange for the cheapest cup of coffee on their menu – a short cappuccino.

She travelled extensively from the savings she could manage. She met people on the open road – artists, entrepreneurs, saints, visionaries, who inspired her to the core and gave a new direction to her life. Meanwhile, she discovered herself, her true self. Somebody who likes to talk to people, random people. Somebody who wants to listen to their stories. Somebody who wants to tell stories, share stories. She felt a sense of belonging to the world. She believes only travel and exploration can do such magic to someone. When we move out of our routine lives, break out of our comfort zone, we become capable of things we had never thought we could be capable of.

In 2017, after completing her first draft, she wrote to various leading publishers but never heard back from them. Dejected and clueless, she participated in Amazon Kindle’s Pen to Publish competition and her first book was released as an ebook. She participated and was overwhelmed by the reviews her book garnered. She lost the competition but her book was on the notable mentions list.

In 2018, she started a coffee table book venture with her friend but they later had to shut it down as the Indian companies in Gurgaon were not ready to spend on coffee table books and felt that the product was an unnecessary luxury.

In 2019, she made her TV debut as she hosted the series ‘Kar Ke Dikhayenge.’ She was approached by one of her mentors, Amit Singhal, who felt that she could pull off the role with ease as she’s talented at speaking effortlessly. The entire TV Series broadcasted every week on Hindi Khabar Channel, Jio Network and Talentopedia platform.

Through these years, she decided not to give up on her dream of becoming a successful author and persevered to build a vibrant community of readers & followers on social media that she addresses as #SCFamily. She interacted with her community and discussed her books, ideas, travel, life, dreams, startups, love and much more.

In 2020, she self-published her second book ‘You Only Live Once’ and sold a record 13,000+ copies on her own making the book one of the highest selling self-published titles in India. Stuti believes in the power of community and feels that her readers and supporters have been the warriors in helping spread the word of mouth for her books. Her readers, mostly Indian millennials searching for the meaning of life, relate to what the characters from her books go through and feel thoroughly motivated to take the plunge after reading her stories. The slumping sales of On The Open Road revived after the second book became a runaway bestseller.

She credits the overnight success of her second book to the years of consistent hard work and learning from every failure that came her way after quitting her corporate career. She campaigned on her own for three years – travelled to every corner of India, built a social media presence, packed and dispatched books to customers, and spent sleepless nights in a row. Her in-laws, new family, also helped her with managing book operations as she turned her home into a warehouse post marriage.

She wants to publish many more titles and possibly get her books adapted into movies. That’s all for now!

Stuti loves to travel. She has travelled to every state in India and 13+ countries. She has sailed to the Andamans, camped with the Indian Jawans in Arunachal Pradesh, scuba dived in the Indian Ocean, swum with the dolphins in the Mediterranean, danced to Bollywood songs on the streets of Prague, floated free for hours on the beach in the Island of Mallorca and wishes to travel the world before she dies. Every year, she spends time in the coastal village of Palolem in Goa as she feels she belongs there. She immensely loves water and any sport related to it. She has a fear of heights though! Ramy, a popular character from her books, who is an avid traveller, is a part of her personality.

Stuti loves to dance. It keeps her spirits up and her body in shape. She has been trained as a classical Kathak dancer by her mother who has been awarded by Raj Kapoor and is an exceptional dancer. Stuti has also learnt western dance at her school from the famous choreographer Amarjeet Singh also known as Kunwar Amar. Stuti feels she’s an amateur though and has a long way to go!

Stuti loves to sing and recite. She could memorise more than 400 nursery rhymes as a three-year-old. She still can memorise most of the songs she listens to! She feels that music is the invisible thread that connects us to God. Music helps calm her mind and soul.

Stuti has partnered with the NGO Voice of Slum and helps them raise funds through various initiatives. Her second book ‘You Only Live Once?’ was launched by children from Voice of Slum. Women empowerment, child education & welfare and environment conservation are a few issues very close to her heart.